Lately, there has been a lot of industry discussion around the use of hydrophobic insulations as one method of preventing corrosion under insulation (CUI). One recent article by a highly respected corrosion engineer cited the 20-year history of using expanded perlite insulation in a Gulf Coast facility prior to the advent of corrosion inhibiting coatings that are now commonly specified to prevent CUI. The article states, “during those years, hydrophobic insulation was being installed over ’unprotected’ carbon steel, and unless there was an equipment design detail which held water like a bowl, our experience was excellent. CUI inspections revealed no corrosion.” This excellent article goes on to say, “That’s not to say we did not have a CUI problem in this refinery… the hot insulation on it was either calcium silicate or mineral wool. These were the only places where CUI was being found, plus anywhere the equipment design detail held water like a bowl.”[i]

Industrial Insulation Group, a Johns Manville company, is well-positioned to provide perspective on all of the materials cited and now commonly used in the market because our numerous North American production facilities manufacture calcium silicate, expanded perlite, mineral wool, and fiber glass. We also supply hydrophobic, flexible, thin microporous blanket insulations. Certainly hydrophobicity, or the ability to resist water infiltration, is one of the key reasons that expanded perlite has a 50+ year documented history of CUI prevention, but that’s just the beginning of the story. In today’s industrial market, there are numerous insulations, including perlite, mineral wool, silica aerogel and microporous thin blankets that have the ability to shed bulk water.

Fundamentally, most of the raw materials used to produce these insulations are, in fact, hygroscopic, meaning they will absorb water. The Perlite Institute indicates that raw expanded perlite exhibits water absorption rates of between 200-600% by weight and is, “suggested as an absorbent media in enclosed containers for the disposal of liquid toxic waste substances.” The only reason finished insulation goods are hydrophobic is because production methods employ various chemical additives such as silicone or oil based repellants.   However, these treatments will all burn off around 570°F, rendering all insulations susceptible to water absorption should there be a failure in the weatherproof jacketing system. Knowing that demanding, industrial, high-temperature processes will eventually rob all insulations of their hydrophobic tendencies within the zone where the insulation contacts the pipe, water absorption cannot be the only indicator for CUI. 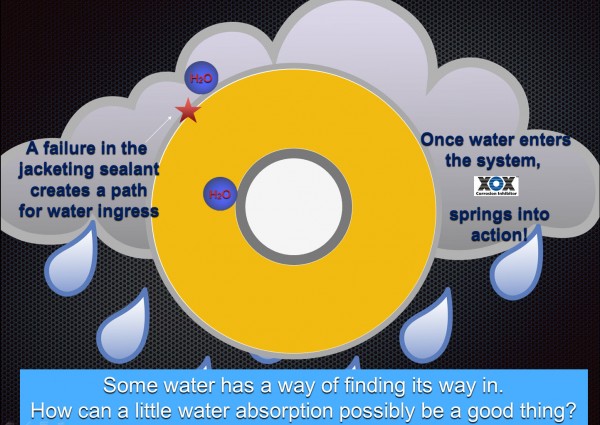 Let us be completely clear about this fact: in laboratory testing, calcium silicate will absorb water when fully submerged. It is cementitious by nature and therefore NOT hydrophobic. However, calcium silicate has been the go-to, high-temperature insulation for many engineers since the end of asbestos. As mentioned above, calsil was historically associated with CUI, but it wasn’t just because it held water. Expanded perlite used on pipes and equipment above 570°F would absorb annulus water too, but its chemical formulation did not have the tendency to induce corrosion.

In 2002, a talented team of chemical and material engineers at IIG and JM decided to take on the issue of CUI associated with calcium silicate’s chemical formulation. They developed a proprietary, corrosion-inhibiting package called XOX. This multi-faceted chemical package works on two levels to prevent CUI and has been integral to all IIG domestically-produced calsil and perlite since 2002. Twelve full years of ASTM testing and millions of linear feet of in-situ industrial projects have proven that XOX provides active corrosion inhibition.

How does XOX work?

First of all, XOX is not a single compound that will dissipate over time. It is a precisely blended combination of silicate cat-ions such as sodium, aluminum, calcium and magnesium with varying solubilities that are activated by water ingress. These compounds are integral to the formulation and comprise 95% of the total raw material inputs. If/when water eventually infiltrates the system, XOXsprings into action. Water that penetrates or gets trapped in closed condensation loops will dissolve molecules of the silicate cat-ions which then settle on the surface of the pipe. When the hot pipe vaporizes the water it leaves behind a corrosion-inhibiting surface coating.

One of the most soluble and historically well known cat-ions used is sodium silicate.   This compound has been used to prevent internal corrosion for more than 80 years.[ii] XOXis a predictable, long-term way of delivering on-demand, silicate cat-ions onto the outer surface of the pipe. Other alkaline components of the package such as diatomaceous earth, quick lime and Portland cement continuously work to buffer the pH of any absorbed water to keep it well above the CUI range, i.e., above pH 7 (but long-term pH levels ≈ 10). Both the surface coating and the pH buffering effect have been proven to prevent acidic electrolytes contained in water from creating a cathodic flow; therefore, XOX can be classified as an active corrosion inhibitor. In fact, recent ASTM C1617 third-party testing has once again validated that XOX–treated calsil and perlite outperform all other industrial insulations by causing less corrosion than even deionized water!

History has taught engineers to detail the weatherproof metal jacketing system to effectively shed rain and wash down water, creating the best, first–line of defense against CUI. Should the jacketing or penetration sealants fail and water enter the system, XOX is a proven backup defense. All calcium silicate and expanded perlite that IIG produces in North America is treated with XOXand provides a better overall value by balancing performance, CUI protection and low installed cost.