“Bring On the Heat”

Just about everyone who works with or specifies insulation products understands the basic principles of thermal conductivity. In most applications, the primary feature of a thermal insulation material is its ability to reduce heat exchange between a surface and the environment or between one surface and another surface. This is known as having a low value for thermal conductivity, often expressed in terms of K-factor. Generally, the lower a material’s thermal conductivity, or K-factor, the greater its ability to insulate for a given material thickness and set of conditions.

Referencing the graph below, what do these exceptional K-factors tell us about InsulThin HT? Starting at about 100°F and up to 600°F, InsulThin HT performs comparably to competitive, flexible, silica aerogel insulation blankets; but as the process temperatures approach 700°F – 800°F (371-427ºC), the magic begins! As process temperatures rise above 800°F, InsulThin HT’s K-factors remain relatively low, whereas the competitive product’s K-factors begin to increase dramatically. This is when the comparative thermal performance of InsulThin HT blows the competition away! This is due to InsulThin HT’s ability to block radiant heat loss more effectively.. 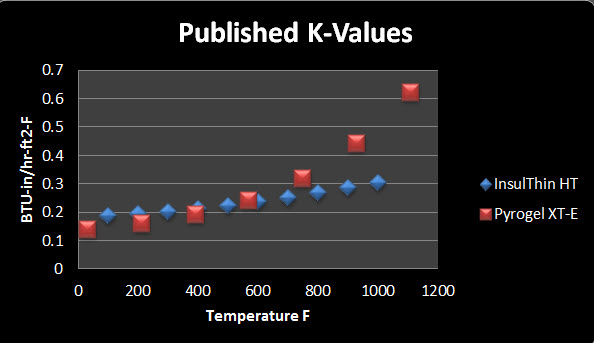 From a technical perspective, the exceptional thermal performance and low K-factors are great features, but the real value comes from how these features translate into savings for the contractor and owner in terms of materials, labor and space. To demonstrate these savings, the following table compares InsulThin HT to a competitor’s thin, blanket insulation. The table captures how thick the insulation has to be to meet a “safe-to-touch” temperature of 140°F (60ºC) on a 12” diameter pipe across various process temperatures.

It is significant to note that beginning at 840°F (449ºC) and moving up to 1,110°F (599ºC), InsulThin HT offers an insulation thickness advantage between 5mm and 20mm, or, in other words, up to two full wraps of 10mm thick material. That can equate to significant material and labor savings when installing InsulThin HT on a large job. Although not shown on the chart above, as the pipe sizes increase in diameter, the InsulThin HT advantage at higher temperatures increases even more dramatically and can reach a difference as large as 40mm of material. Basically, as the pipe diameter and operating temperature increases, the spread between the cost of installing silica aerogel versus InsulThin HT grows.

The advantages of using a thin, high-temperature, blanket insulation in tight spaces or around large tanks or vessels are well documented, and Industrial Insulation Group’s new InsulThin HT is a perfect product to use in these applications. Lower K-Values at high temperatures, hydrophobicity and superior thermal stability in humid conditions make InsulThin HT the clear choice when space is limited and process temperatures are high.