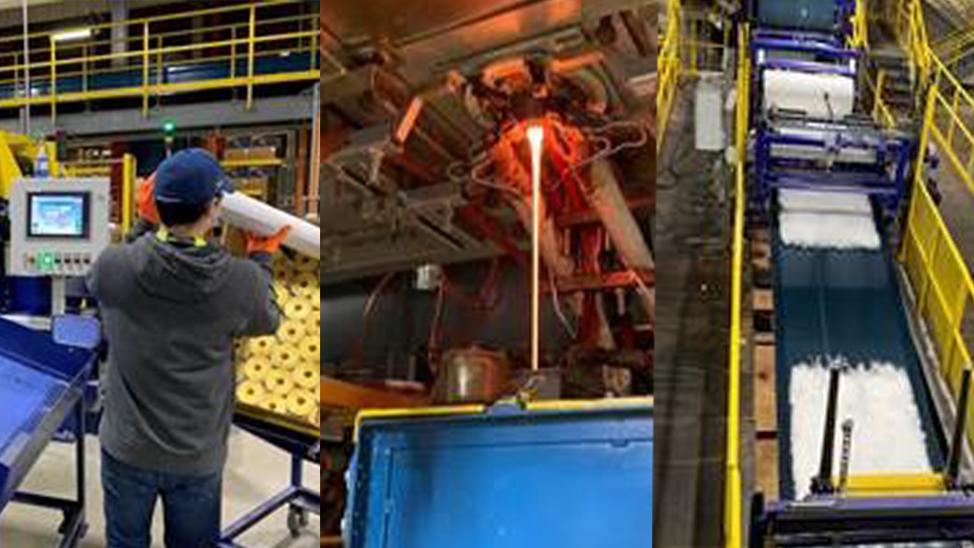 For many people and companies throughout the world, Covid-19 caused delays and setbacks, and JM was no exception. We announced our Defiance, Ohio pipe plant expansion in 2019, with an anticipated completion date set in early 2020. Unfortunately, just as we reached the final stages of construction, we hit a microscopic snag that brought the whole world, and our plant expansion, to a standstill.

The original plan was that when the new manufacturing line was in place, the engineers, who helped design and build a major part of the equipment, would travel from Germany to Defiance, Ohio to help put the finishing touches on the machinery and ensure it was operating appropriately. However, as the world became more and more restrictive, it became apparent that this onsite visit from foreign collaborators was not going to be a viable option for completing the Defiance pipe plant expansion project.

That’s when the JM team in Defiance knew they would have to innovate if they were going to move the ball forward under highly restrictive travel conditions. They explored a myriad of options and landed on a highly innovative solution to a highly unique problem: the HoloLens, cutting-edge, new technology that would help bridge the distance between the engineers in Germany and the plant in Defiance without requiring anyone to travel.

The HoloLens is essentially a wearable computer that rests on your head. A visor attached to the front of the device serves as a see-through screen where images may be displayed for the wearer to reference while still being able to see through the screen into the real world. The helmet itself takes high-definition footage of the objects in front of the wearer and displays that footage through Microsoft Teams at a remote location. In our case, the footage was displayed in Germany in real-time.

While the use cases for this type of technology are diverse, in the case of the Defiance plant expansion, it was a crucial stepping-stone to advancing the plant expansion when in-person collaboration wasn’t a viable option.

Dave Lucas, JM’s Lead Electrician for the Pipe Department in Defiance, was the “man on the ground” in Defiance. After a brief training period with the new technology, Dave was responsible for operating the HoloLens and collaborating with the engineers in Germany to begin fine-tuning the machinery in their absence. “Our team in Germany was a little apprehensive about our proposed solution, the HoloLens, at first, but after our first session they couldn’t believe that our communication and our vision were like they were sitting right next to me in the plant,” he said.

“The video camera was an excellent solution for the team in Germany as well,” Dave explained. “It was so high definition, that they could often see a component in the system before I could because I had to adjust my bifocals. It was pretty remarkable that someone in Germany could locate something on the screen faster than I could in person,” he said.

Pratyush (Yash) Misra, JM’s IS Electrical Controls Engineer, explained that one of the major benefits of incorporating this technology was that it gave the team the ability to share images, drawings, and files even though Dave wasn’t sitting at a computer. “The team of engineers could not only throw a document into Dave’s field of view, but they could also markup the document or highlight a specific portion of it, and Dave could see that in real-time. Using this technology helped make the entire process much more efficient as Dave wouldn’t have to locate a specific section on his own,” Yash said.

Now that the first phase of the pipe plant expansion is complete, the team in Defiance already has plans on how to incorporate the technology into other aspects of the facility. “We’re a 24-7 facility,” Yash explained. “If we have an issue in the plant in the middle of the night, and the onsite plant personnel can’t solve it, they have to reach out to an engineer for support. Often times, the engineer will have to travel over an hour to the facility to help fix the situation. By utilizing the HoloLens, we can have the engineer “virtually on-site” and solving problems instantly – even if they are sitting at home in their living room.”

By thinking outside the box and exploring new technologies, the Defiance pipe plant expansion team was able to overcome game-changing setbacks caused by Covid-19. More importantly, the innovations used by this team will have a future in JM plant operations, evolving how we address problems and helping us optimize efficiency going forward.