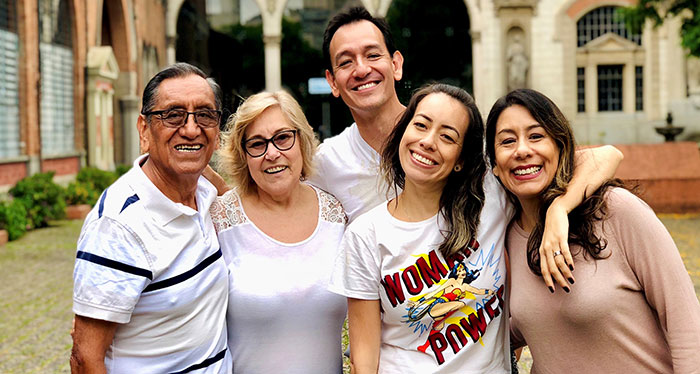 The JM Finance and IT Human Resources Manager says Brazilians’ culture of “what’s mine is yours” is only strengthened by their shared nationality and background.

“The bonding happens automatically,” Claudio said of his fellow Brazilians, particularly those from Rio Grande do Sul, the state where he grew up. “Brazilians are very affectionate people. They care a lot about each other and go the extra mile to help.”

As JM celebrates National Hispanic Heritage Month, we sat down with Claudio to discuss what he loves about his heritage.

Claudio was born in La Paz, Bolivia and was raised in Brazil’s southernmost state, where “os gauchos” – proud of their history of raising cattle – live alongside descendants of Italian and German immigrants.

Part of a tight-knit family, he grew up spending long Saturdays crowded around the dining table after church.

“We’re close and we talk,” he said. “Everything is family-focused.”

Luckily for any visitor to Brazil, he said, that family focus is quickly expanded to include new faces.

“Brazilians love strangers,” Claudio said. “They want to show you what Brazil is and they want you to feel welcome.” He also noted that most locals will jump at the chance to speak English to American tourists to put them at ease.

Those dishes are among the things Claudio misses about his homeland, since moving to the United States in 2002 to attend La Sierra University in Riverside, California, where he earned an MBA in marketing and finance.

After starting his career as an electronic engineer at Lucent Technologies in São Paulo-Brazil, then moving to the U.S. for his graduate degree, he switched over to human resources work at Canyons Ski Resort in Park City, Utah. He returned to California in 2010 to provide HR for an area hospital before joining JM in 2019 at the Willows plant.

Claudio said the cornerstones of his heritage lined up naturally with JM’s core values of People, Passion, Perform and Protect.

An avid outdoorsman, Claudio moved to Denver and WHQ in April of this year and has made short work of summiting 11 of Colorado’s 58 14,000-foot mountains, also known as “14ers.”

Claudio said he “literally had no intention” of making his move to the U.S. permanent, but after living in California and now, Colorado, he has found he belongs in the Centennial State, among other hiking and mountaineering enthusiasts who share his love of the snow.

He keeps in close touch with friends and family, sometimes over a shared love of American football via a fantasy football league.

“My mother still hasn’t accepted that I’m not coming home,” he said.