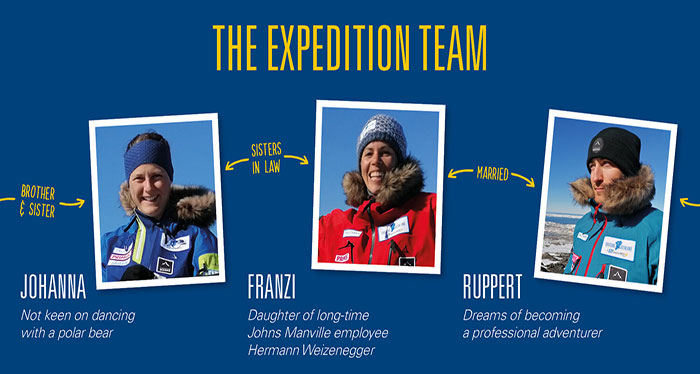 500 miles, 45 days, 1 team – when Franzi Heim, daughter of a longtime Johns Manville employee in Germany, set off to traverse one of the coldest and loneliest places on Earth, there was no doubt that it was going to be an adventure unlike any other.

Following the historic tracks of Swiss arctic researcher Alfred de Quervain (1879 – 1927), adventurousness was not the only driver for this endeavor. Franzi and her team, composed of her husband Ruppert and sister-in-law Johanna, were partnering with a German university and institute to collect important climate data during their voyage.

When the trio left for Greenland at the end of April, Johns Manville and #JMextraMile were with them. After arriving in Greenland and waiting out a required quarantine to ensure none of them was suffering from COVID-19, a helicopter brought the team to their starting place at the easternmost point of the island. From there they covered daily distances of up to 12 miles by foot and 68 miles using a kite, while pulling 440 pounds of equipment on their pulks: Nordic-made low and short sleds used for transport in sports.

On a scientific mission

Following the 500-mile-long traverse of the island from east to west, the team was able to make countless measurements in snow density and depth. The climate data the group collected will be used by scientists researching climate-induced changes on the ice caps of Greenland.

“The loss of ice of around 170 gigatons / year in Greenland is dramatic. If this trend persists, the icecap in the southwest of the island will be completely melted within the next 300-500 years,” said Thomas Hitziger, Chairman of Iceploration.

Looking back on the adventure, the greatest danger Franzi, Johanna and Ruppert faced was not an encounter with a polar bear; rather, it was the risk of falling into a crevasse or suffering from frostbite as they journeyed. At one point, the team had to hunker down in their tent and dig deep into the snow to wait out a violent snowstorm that brought wind speeds of up to 81 mph and temperatures as low as -22°F.

Despite the snowy five-day setback, the team arrived at its final destination 10 days earlier than expected – a fine example of going the extra mile.

That’s what we are all about at Johns Manville: going above the expected – going the #JMextraMile.

Watch the below interview with Franzi and Ruppert after they returned from Greenland and click here if you want to learn more about the expedition.