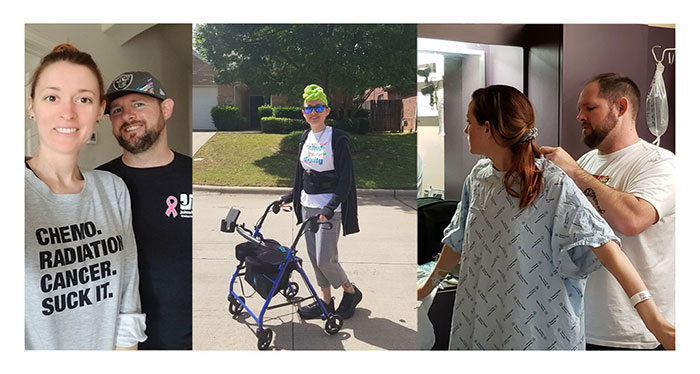 ‘This Journey Does Not End For Us’

Doctors initially told Jessica Carroll they were “99 percent sure” the lump she found in her breast in December 2019 was nothing to worry about. They suspected it was the result of a family history of benign tumors.

But three months later, as she sought treatment for ongoing back pain she thought was caused by moving a refrigerator, Jessica learned that initial diagnosis had been wrong.

Jessica had cancer. Biopsies later confirmed it was Stage IV metastatic breast cancer, which had started as a lump in her breast and quickly spread to her spine, sternum and hip.

The cancer was “terminal,” doctors told Jessica, wife of Mike Carroll, interim Safety Manager for Johns Manville’s Cleburne, Teaxs plant. She was just 30 years old at the time of her diagnosis.

Radiation started immediately and in a matter of weeks, Jessica, a registered nurse, became the patient. The formerly active caregiver was relegated to a wheelchair or a walker, fitted with a back brace to aid in stabilization.

Meanwhile, Mike Carroll, then 34, struggled with the reality that he could lose his wife.

“I was thinking that this may be the last short amount of time that I had left with my wife,” Mike said. “She was physically incapable of doing tasks like getting into and taking a shower and going to the bathroom on her own. This was very hard for me to take in.”

Worsening the blow, was the news that due to the radiation’s rapid start and location, Jessica had no opportunity to extract eggs in hopes of having a child in the future. Jessica later endured a full hysterectomy to slow the progression of her hormone-driven cancer.

Doctors also performed surgery to replace the deteriorated vertebrae and discs in her spine with mechanical substitutes, while removing as much of the cancer as they could.

“He was so pumped at how successful it went,” Mike said of Jessica’s surgeon. “They were able to remove all the cancer tissue that was visible around the vertebrae, which a biopsy confirmed that the cancer tissue was ‘dead.’”

Despite any treatment success, Jessica said her cancer continues to be “deemed incurable.”

“While we are very thankful that many are fortunate to experience (a cure) in their cancer journey, it does present itself hard sometimes to think that this journey does not end for us,” she said.

Six months after her treatment began, Jessica’s oncologist was “stunned” by her results, Mike said, noting the cancer had greatly reduced and her doctors had a hard time spotting any evidence of cancer.

“While we have been blessed with great news regarding her cancer recently, she has to continue treatments for the rest of her life and there is always this thought in both of our minds of if and when it will come back and how hard will it come back,” Mike said, now nearly two years after the initial diagnosis.

Jessica added, “I love that I am able to continue to defy the odds that were given to me. My source of motivation through the challenging times and to fight for my life is not for me personally, but for my husband and my family as I do not want to see them have to go through losing me.”

The couple said they have been buoyed by their faith and overwhelmed with support from their family and friends, from cancer support networks and from their employers and coworkers.

“What I experienced from them is truly what it means to have a family at work,” Mike said of his colleagues at Johns Manville.

Jessica and Mike say their experience with cancer has served to reprioritize their life goals and to refocus their attention on what matters most.

“We are so incredibly thankful of the path that our stage-four breast cancer journey has taken, as we know that while there are others as fortunate as we are, there are many who are not,” Jessica said.  “Be appreciative of the time spent with one-another. Life can change so fast and (we) know it sounds cliché’, but do not take it for granted. Our priorities have shifted greatly from all of these ‘long term’ goals and materialistic things, to putting our faith and family above all,” Mike added.

They are sharing their story with others in hopes of helping others facing cancer diagnoses – particularly those facing metastatic cancer and young people who, the couple say, are often misdiagnosed.

“What we have come to realize with our own story and hearing from other young adults who have been diagnosed, is that we were all originally misdiagnosed,” Jessica said. “Make sure to get second opinions to verify findings and diagnoses.”

Mike and Jessica said they want to put a spotlight on metastatic breast cancer because many patients are unaware of the potential longevity of the disease and its treatment.

“Metastatic breast cancer seems to be somewhat not covered or reflected upon in Breast Cancer Awareness Month,” Jessica noted. “The major educational piece here is that in a lot of cases, a late-stage diagnosis like mine, treatment becomes lifelong. The doctor will have a patient on one type of treatment for as long as the body can handle and/or until the cancer mutates and becomes resistant to the treatment. Then they will move to another (treatment), if available.”

She added that the focus of Breast Cancer Awareness Month should shift from emphasizing saving women’s breasts to saving patients’ lives.

“There are also certain slogans, like ‘save the tatas’ and others, which really are terrible,” Jessica said. “Ask any patient out there what matters more, their life or their breasts, and I imagine that all would pick life.”