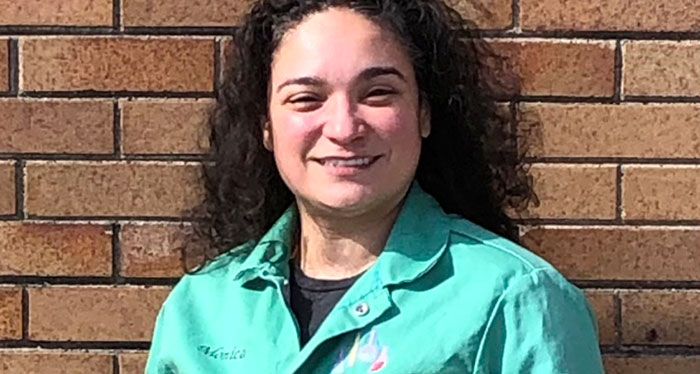 “I just built myself a toolbox from scratch,” she said. “I welded it and put the entire thing together. It’s really cool.”

Although her official Johns Manville (JM) title is Maintenance Apprentice ― also called a Mechanic B ― her coworkers at the Engineered Products facility in Waterville, Ohio, like to refer to her as the “First Lady of Systems.” In fact, they recently had a jacket made for Monica with that title written on the back.

What’s the meaning of it?

“I take it as I’m the first woman to accomplish that job at the Waterville facility,” said Monica, who has worked at JM for four years. “The guys keep joking about me being some type of royalty. I’m not. I’m just doing what I love.”

Doing what she loves includes changing out motors, working on fire systems and rebuilding air compressors at the plant. Monica is the only woman in a mechanic/maintenance role at the JM Waterville complex, which are two plants located about one mile apart and collectively employ around 600 people.

In the U.S. in 2020, only 5.3% of maintenance technician roles were filled by women, according to Zippia.com, a career information site. When asked how she feels about working in a male-dominated field, she said, “I don’t have a feeling for it really. The work is heavy, hard and dirty. But anyone can do it if you have the right mindset and you like a challenge.”

Monica’s coworker, JM Systems Mechanic Rob Meek, has taken note of her mindset, as well as her drive.

“I was impressed by her desire to learn,” Rob said. “She’s hungry for the information. Her work ethic is second to none.”

JM Maintenance Supervisor Jeff Woodbury agreed and said Monica wants to be the best at what she does.

Monica credits her grandmother, who raised 11 children on her own, for instilling strength, work ethic and persistence in her.

Monica has two years left in the apprenticeship program. The single mother of four and grandmother of one currently attends Owens Community College in Perrysburg, Ohio, and is on track to earn her journeyman’s card, which is granted after completing an apprenticeship and passing an exam. Although work, school and motherhood may sound like a lot to juggle, she said she doesn’t see it that way.

“I just do it,” she said. “I don’t have time to overthink it because I’m so busy. It’s all good stuff and I feel fortunate to have the opportunities that I do.”

Monica encourages anyone who has an interest in a maintenance-focused career to, as she put it, “Just take the step and do it. If you have a desire to do anything, it can be accomplished with determination and the willingness to make sacrifices.”