As we see a cultural shift toward more energy-efficient and sustainable living, building compliance codes like the International Energy Conservation Code (IECC) are being adopted by more and more local jurisdictions. The IECC is a prescriptive code that has established regulations for energy efficient buildings. The code is designed to help promote the use of new materials, technology, and energy efficient designs.

The 2015 commercial IECC states the following:

While the IECC doesn’t specify what qualifies as an “unconditioned” or “exterior” space, the ASHRAE 90.1 2016 code offers a unique definition for exterior spaces. ASHRAE 90.1 2016 defines “exterior” spaces as including, “attics above insulated ceilings, parking garages, and crawl spaces,”2 as well as spaces outside the building envelope, such as rooftop ducts.

As you can see in the map below, climate zones 5-8 are in the middle to northern part of the country. They often experience much colder weather patterns than zones 1-4. As a result, commercial ducts in unconditioned and exterior spaces in climate zones 5-8 have typically required much more energy to maintain consistent temperatures than those in zones 1-4. The commercial IECC and ASHRAE 90.1 introduced the R-12 code change in an effort to address the inefficiencies of these types of duct systems. 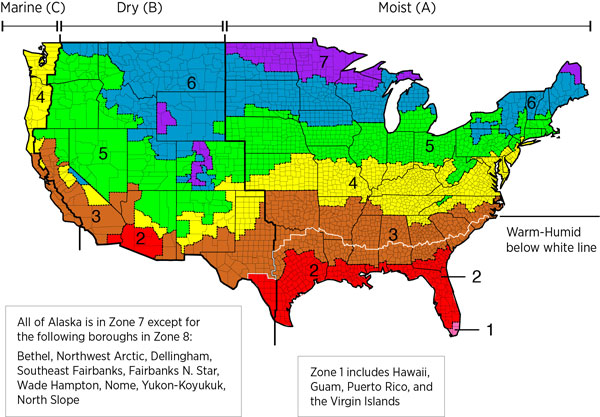 However, these new codes have also created new and unique challenges for system installers and designers. For installers, the challenge has been two-fold. First, R-12 duct insulations have been largely absent from the HVAC market. As a result, installers have had to double-layer the insulation to attain the required thermal performance. This leads to the second challenge: double layering insulation is costly, both in terms of material, and the amount of time it takes to fabricate and install two layers of insulation.

Historically, Linacoustic RC has had a reputation for being easy to work with and fabricate, and our 3” liner is no different. Our unique flame-attenuated manufacturing technology creates a fiberglass core that can be processed consistently and efficiently on duct fabrication equipment, like a RotoZip machine or a water jet cutter.

For contractors looking for R-12 duct warp, Microlite FSK Formaldehyde-free™ duct wrap is the only duct wrap on the market with an installed R-value of R-12 in a single layer. Microlite FSK duct wrap comes with an FSK (foil scrim kraft) facing, designed to help ensure a closed system that prevents moisture drive and offers condensation control. This design helps prevent damage to the insulation and surrounding areas. Additionally, the material is GREENGUARD® Gold certified. It is the only duct wrap available that offers installed R-12 performance in a single layer.

Bear in mind, however, that there is a second challenge that has been created by the new R-12 requirement: R-12 insulation is thicker, and as such, it requires more space once installed. This impacts both contractors and specifiers. When systems aren’t designed with these space constraints in mind, installers have to find ways to adapt the design on the fly. This can lead to under-insulated ducts that don’t meet code or aren’t as efficient as they were designed to be.

We addressed these new code requirements, and the insulations you can use to meet them in our webinar, Considerations for Insulating Ducts in Exterior & Unconditioned Spaces. This webinar not only addresses insulating ducts in unconditioned spaces, but it also dives into details about insulating rooftop ducts with polyiso foam (like XSPECT®).