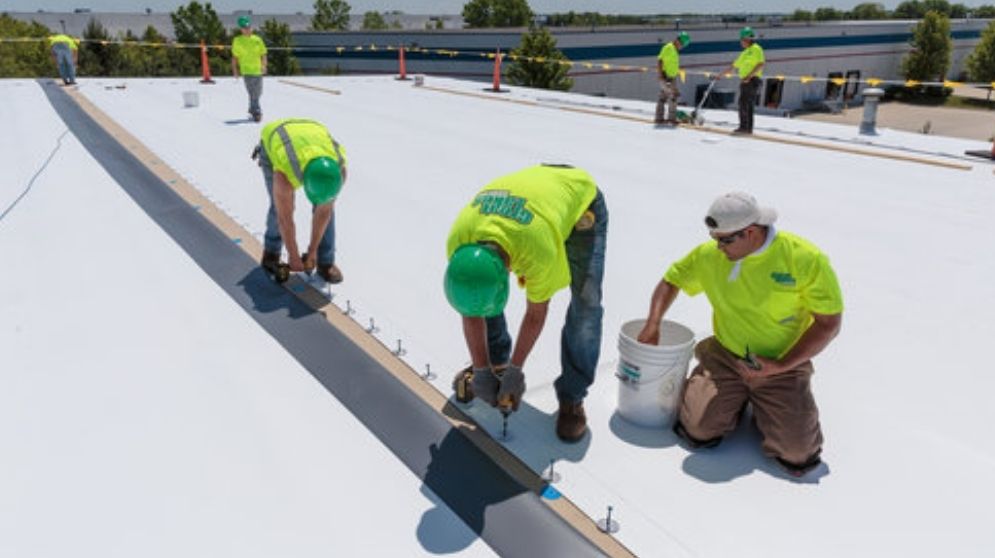 DYWIDAG-Systems International (DSI) USA Inc. is part of the DSI International Group. The scope of work at DSI is the development and application of post-tensioning and geotechnical systems for the construction industry. DSI systems and products are used in the repair, rehabilitation and construction of commercial and private buildings, bridges, tanks and other engineering structures above and below ground.

DSI produces unique construction materials used on signature structures throughout North America and they built one of the first plants in the area leaving it dated and weathered compared to the other buildings in the area. The original 60,000 sq. ft. R-panel metal roof on the building was at least 35 years old and had a history of multiple leak areas with numerous patches.

As is often the case with aging metal roofs, the owners originally wanted to apply a roof coating to stop the leaks as a quick and cost effective solution.

When the roof leaked, the products inside the DSI building were getting damaged. “We have a large investment in our manufacturing equipment,” noted Bob Dedoes DSI Bolingbrook Operations Manager, “so damage to our equipment or products isn’t acceptable.” As major roof leaks continued for two to three years, the owners continued to have discussions about a reroof project, looking at options, as well as, planning and budgeting for it.

“We made an extensive presentation to the COO and CEO of DSI, providing background on both, our company and Johns Manville. Based on the strength of our established relationship with JM, DSI was comfortable with our recommendation. We took time to understand their company’s needs and offered the right fit and right product to create the best solution” explains Great Lakes Roofing Vice President of Sales Jesse Spain.

When the repairs started in November, the team quickly realized the rust was so bad around the skylights, they were going to create an even greater problem. The month of December was not pleasant, the rain and snow came and so did the leaks. “The problem was, there was so much asphalt patching we couldn’t see the rust areas,” Dedoes said. “We had a quote for the coating system, but with the amount of rust on the roof, we just couldn’t coat over it.”

Spain explained the dilemma to DSI, making a case for the flute fill system as a viable alternative to cover and seal the original metal roof to prevent further leaks. “While we were surprised at the increased cost, Jesse convinced us it was necessary to fix the problem and we went with the JM TPO 60 mil membrane, ENRGY 3® Polyisocyanurate Insulation and flute fill system. Doubling the warranty from 10 to 20 years made the increase in cost worthwhile,” Dedoes remarked. “At Great Lakes Roofing, we are quick and efficient with flute fill systems –our crews have years of experience,” commented Spain. As was the case of the DSI project, some metal roofs are too old and have been tarred and patched too many times for a roof coating, so a flute fill system is the best-value alternative for a building owner.

Spain emphasized the importance of the long-term relationship between Great Lakes and Johns Manville. “We worked with JM in regards to the length of warranty we were looking for, as well as what type and size fastener was required for the pullout test. We are comfortable and pleased with JM; their products are superior and technical staff are always responsive,” he testified. “For us, it’s a win-win between a top tier manufacturer and a top tier contractor. Our partnership with JM adds value and our customers benefit from this.”

“The Great Lakes Roofing crew did a great job of educating us about a system that was new to us,” Dedoes added. “We are happy. The roof looks great and it went down quickly.”