Earlier this year, we published a blog, "A Systems Approach to Corrosion Testing," introducing a new corrosion test method being conducted by a third party agency to better understand the effect of corrosion under insulation (CUI).  The program’s objective was to test how insulations perform in “real-world” installation and environmental conditions by using carbon steel pipes insulated with blanket insulations and external cladding.  These assemblies were exposed to harsh environmental conditions to accelerate and promote corrosion.  As this test was designed to replicate real-world conditions, the testing period lasted for 6 months, during which the assembly was consistently exposed to highly corrosive environments. At the conclusion of 6 months, the third-party agency analyzed the results, and we compared them to laboratory data based on ASTM specifications.

The two competitive, thin blanket insulations examined in this study were Johns Manville’s microporous blanket, InsulThin™ HT, and a silica aerogel blanket insulation produced by a leading aerogel insulation manufacturer.  Both materials were wrapped, double-layer, around 2” carbon steel pipes and secured with a metal cladding, and then each assembly was exposed to two different environmental conditions.  The first condition periodically immersed the two assemblies in solutions with up to 1500 ppm chloride. Throughout the test, the pipe temperatures were cycled between ambient and 600°F, causing “boiling” conditions for 18 hours each week.  The second condition maintained the pipe temperatures at 45°F throughout the test, periodically submerging the samples in up to 1500ppm chloride solutions, so that the assembly remained wet for the entire duration of the test.

For each of the four test set-ups (two insulations x two environmental conditions), corrosion rates and depths were calculated using an electrochemical method. After the testing was complete, the corrosion depths were then measured using an ultrasonic technique and with the use of an optical microscope.  The measurements were compared to results from laboratory ASTM tests using the same two insulations on carbon steel.  The conclusions from the third party agency's report are consistent with the findings from the ASTM test methods, and they include the following: 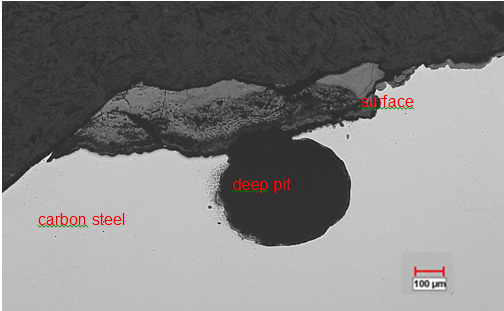 It is our view that the testing reveals that InsulThin HT results in less corrosion than the silica aerogel blanket in accelerated corrosion environments. This test program also provides support that the ASTM test methods currently being used by the insulation industry can be a good representation of “real-world” environments, and the findings are consistent with the laboratory results we find using the ASTM C665 and ASTM C1617 test methods.

Though testing with full assemblies can be challenging, the use of third-party agencies provides a number of benefits, including consultation and unbiased direction when designing and conducting the tests, as well as unbiased review and conclusions. As we continue to explore the best methods to prevent CUI in industrial processes, evolving existing insulation test methods to account for real-world conditions is critical. This is why this new test method that studies the long-term effects of highly corrosive environments on insulated assemblies is, in our view, a comprehensive look at real-world performance.

In Part 3 of this blog series, we will discuss the thermal testing that was conducted in parallel with the accelerated CUI program. Not surprisingly, the two insulations depict differences in thermal performance before and after exposure to the harsh temperature cycling conditions, though not to the same degree for both insulations.