When To Use Double Layer Pre-molded Pipe Insulation

Double-Layer Pipe Insulation In discussions with industrial insulation customers, we are often asked when it’s appropriate to convert from single-layer insulation to double-layer insulation.  As with most high-temperature industrial insulation questions, there is no simple answer because there are a myriad of details and jobsite conditions that affect the final outcome. While there isn’t a hard and fast rule about when to install two layers of insulation, there are some go-to, rule-of-thumb recommendations that are common in the industry.

*View the standard schedule for calcium silicate double-layer construction. Double-layering insulation isn’t simply a practice to help maintain process control and safe-to-touch temperatures. These recommendations are also in place to ensure that the insulation is still effective when heat causes the pipe to expand. The significance of the longitudinal thermal expansion of pipes can vary depending on the operating temperature of the system, as shown in the chart below. Thermal Expansion of Pipe Length in Inches/1000 Feet: Carbon Steel* 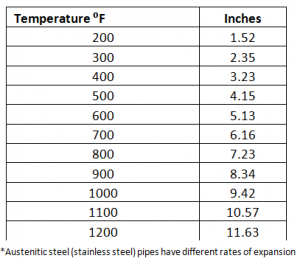 At 1200°F, the length of the pipe expands nearly 12 inches. Fortunately, the circumferential pipe expansion is negligible (only about 1/100th of an inch from 200°F to 1200°F), thus the primary concern for designers and installers is to create systems that can accommodate linear expansion. Regardless of the magnitude of the expansion, the entire insulation system will need to maintain its thermal performance. However, designers face a unique challenge: while heat causes the pipe to grow, it can have the opposite effect on insulation, causing it to shrink when heated. For example, at 1200°F, 1% of shrinkage over a 3-foot section of insulation equates to 0.35”. Over 100 feet, this is equivalent to almost 11.5” of shrinkage. So, while the pipe expands at the top end of the temperature limits, the insulation could be actually shrinking. When this happens, the expansion/shrinkage opens the circumferential joints on the insulation. The opened joints result in heat-loss that can decrease process control and increase the surface temperature of the insulation, possibly creating an unsafe working environment for personnel. This is where double-layered insulation becomes critical. By using two layers of insulation, installers are able to stagger the joints. This prevents a gap from forming between the pieces of insulation as the pipe expands and the circumferential joints open. It ensures that the heat emanating from the pipe does not have a direct path to the outside surface of the insulation. These two features of double-layer insulation help maintain process control and promote personnel safety by ensuring that the heat-loss and the surface temperature of the insulation remain consistent. Thermal pipe expansion is also why the aluminum jacketing is specified to have a minimum 2” overlap on both the longitudinal (because the pipe is also expanding length-wise) and circumferential seams.  Some engineers even specify a 3” metal overlap. Ultimately, the final decision about how many layers to use is up to the specifying engineer, and that decision is largely driven by how often there are expansion joints, elbows, etc. These variances are why there isn’t an absolute rule that applies in every case; however, thermal expansion of the pipe is a significant technical issue that must be addressed in the insulation specification.