Earlier this year, we initiated long-term thermal and corrosion testing with a third-party agency to determine how various types of insulation perform in real-world environments and applications. In Part 1 and Part 2 of our three-part blog series, we introduced these test methods and reviewed the corrosion results of these tests. In this final installment, Part 3, we will review the results of the long-term thermal testing.

The third-party thermal testing explored the effect of high-temperature cycling conditions on the thermal performance of two blanket insulations: Johns Manville’s microporous InsulThin™ HT and a silica aerogel blanket insulation produced by a leading aerogel insulation manufacturer in the U.S.  As part of the testing, two layers of the 10mm blankets were wrapped around 2” carbon steel pipes, secured with metal cladding, and periodically submerged in water while cycling through high-temperature operating conditions.  Thermocouples were placed on the outside of the metal cladding to measure changes in temperature over time.

To ensure test integrity, both systems were heated using the same equipment and settings; thereby having the same process temperature for comparison.  For 18 hours each week, the assemblies, as designed, constructed, and tested by the third-party agency, were immersed in water while the temperatures of the pipe cycled from ambient to 600°F, causing “boiling” conditions.  This cycling protocol was repeated for a total of 6 months.

To compare the two insulation systems, the third-party agency recorded the surface temperatures of the external sheathing when the assemblies were not submerged in water (dry) and the pipe process temperature was at 600°F. The data revealed significant differences in thermal performance between the two blankets over time. Temperatures based on NAIMA 3E Plus® software for both insulations before and after thermal shift (change in thermal conductivity after exposure to high process temperatures) also show differences in the expected thermal performance.  Thermal conductivities based on ASTM C335 (pipe geometry) were used for the modeling calculations. 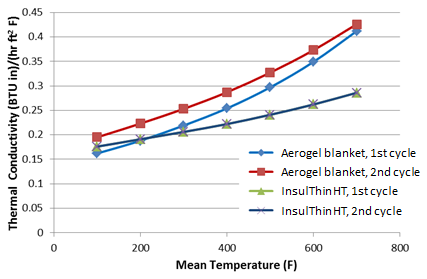 The most interesting observations based on the third-party data are the following:

In our view, the test results reveal critical data for professionals to consider when designing insulation thicknesses and attempting to minimize labor and material costs. Depending on the requirements of the application and the environmental conditions of a project, additional silica aerogel insulation may be required if calculations are based on manufacturer’s published “before-use” thermal conductivity values, rather than the shifted or “in-use” values.  Furthermore, the presence of thermal shift due to high-temperature exposure may only partially explain the higher surface temperatures over time for the silica aerogel blanket.  The exposure of insulation systems to water could also decrease thermal performance due to the breakdown of the insulation materials and side-effects of corrosion.

If you have further questions regarding this study, please contact your JM sales representative and/or JM technical services engineer.