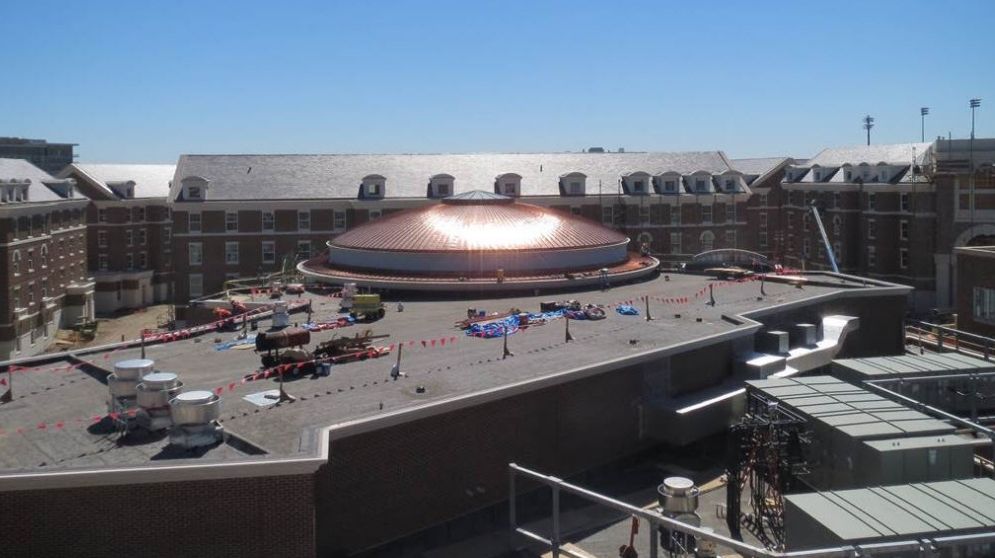 A Dome to the Sky

Founded in 1911 by the Methodist Episcopal Church, Southern Methodist University (SMU) is a private university in Dallas with a mission to “create, expand and impart knowledge through teaching, research and service, shaping world changers who contribute to their communities and excel in their professions in a global society.”

The university’s more than 11,000 students come from 90 countries and all 50 U.S. states and the District of Columbia to take advantage of small classes, hands-on research opportunities, leadership development, community service, international study and innovative programs. The university offers a strong foundation in the humanities and sciences in undergraduate, graduate and professional degree programs.

In 2012, the university’s leadership undertook a project to expand the school’s campus with five new residence halls, a dining hall and a parking garage. Supreme Roofing, Dallas, was selected by the project’s general contractor, The Beck Group, Dallas, to install multiple roof systems on the dormitory buildings and dining hall, including a copper dome with a skylight, and associated copper work.

To create the copper gutters, workers broke the metal while it was in Supreme Roofing’s off-site shop and transported it to the project site for fabrication and installation. Once on-site, each gutter piece was attached using clips, laid in place and soldered—a slow, labor-intensive process.

Workers also fabricated more than 100 rounded copper dormers across all residence buildings. Although the dormers were designed to be the same size, the reality of construction made each one slightly different in size, so one pattern could not be used for all. Instead, every dormer had to be uniquely designed.

For each dormer, workers took field measurements, made a cardboard template and then traced the template onto the copper pieces, which then were cut and fabricated by hand and put into place, similar to a puzzle, one piece at a time. Each piece was soldered together before placing the next piece on top. Rivets then were installed, and the pieces were welded together.

The work was time-consuming. The valleys and small pieces especially were difficult. If any gap remained, the dormers would not be weather tight; each dormer had to be meticulously built.

“Most of the custom sheet metal fabrication had to be done on-site,” says Roberto Valdez, sheet metal superintendent for Supreme Roofing. “There was no room for mistakes.”

One of the most challenging, intricate parts of the project was the project’s focal point—a two-tiered copper dome with a skylight on top of the dining hall.

Planning the dome’s installation required several months of time with The Beck Group’s general contractors. Unlike traditional metal roofing projects installed in a rectangular shape, SMU’s dining hall features a dome, so everything had to be installed on an angle.

Workers then fabricated and installed the copper metal roof. Because of the dome’s shape, the panels couldn’t be pre-measured and had to be fabricated on-site. Workers created a cardboard pattern and then cut and taped everything by hand, running each copper piece through the machine twice to create right and left legs that could be interlocked when installed on the roof. Each metal piece then was hand-carried to the roof by several workers and soldered onto the gutters.

The Supreme Roofing sheet metal crew then installed a skylight in the middle of the copper dome, as well as associated flashing.

In addition, Supreme Roofing workers installed polymer-modified bitumen roof systems on the low-slope roof areas on each dormitory building, as well as in front of the dormers and over the 30,000-square-foot dining hall’s low-slope roof area. Two layers of 1½-inch-thick polyisocyanurate insulation were fastened down, followed by 1/2-inch-thick USG Securock® laid in adhesive. The DynaGrip® Base sheet and Dynaweld™ Cap FR then were heat welded in place.Two layers of 11/2-inch-thick polyisocyanurate insulation were applied followed by 1/2-inch-thick USG Securock.® The base and cap then were torched in place.

Workers were tied-off 100 percent of the time while working on SMU’s buildings, including the low-slope roof areas because the wall height was not high enough to meet Occupational Safety and Health Administration regulations. Temporary tie-off anchors were used at the roofs’ edges.

For the larger area on the dining hall, guardrails were used until they had to be removed to cap the roof. Warning lines then were installed, and temporary tie-off anchors were used when working outside the warning lines.

To prevent pedestrians from inadvertently walking too close to the job site, workers erected a barricaded fence.

“Safety was a major concern throughout the project, especially installing the slate on a steep-slope roof in the middle of a busy college campus with a myriad of other trades working around us,” says Tim Rainey, CEO of Supreme Roofing. “Our on-site safety directors worked closely to ensure the project was secure and incident-free.”

In addition, workers used boom lifts to safely conduct perimeter work, and toe boards were put in place and used for material storage and navigating around steep-slope roof areas. The crew moved the slate to the roof using a Skytrak® and then carried each bundle by hand to the appropriate location and placed it on the toe boards. Because of limited space, the low-slope roof areas could not be stocked, so the material was transported to the roof as needed.

“The roofing work was uniquely challenging, and the finished project is simply beautiful,” Valdez says. “We are all quite proud of this project.”

Click here to view the article as it appeared in PROFESSIONAL ROOFING magazine.