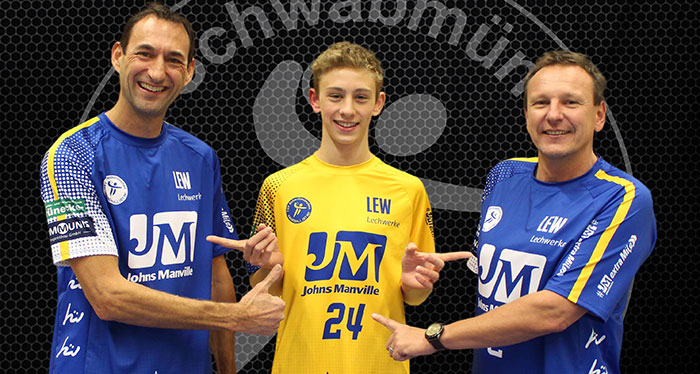 JMer Jörg Lehnert, from our Bobingen, Germany plant, and his friend Christian Labermeier go the #JMextraMile every Wednesday and Thursday by coaching two successful handball teams in the TSV Schwabmuenchen club. Johns Manville is a proud sponsor of these teams and provides new jersey kits for the players to wear.

Handball is a team sport in which two teams of seven players each pass a ball using their hands with the aim of throwing it into the goal of the other team.

Jörg's son, Kilian’s team is currently leading the Bavarian district league Southwest 1, doing so proudly in their brand-new JM jerseys. The team recently competed in the annual “LEW Youth Cup,” which is one of the largest indoor youth tournaments in Bavaria with teams coming from all over Germany as well as from neighboring countries.

For more than 40 years the handball league in the TSV Schwabmuenchen club has been one of the club’s largest and most active leagues. Currently, more than 300 members in 18 teams practice the fast-paced, popular German sport.