Mechanisms of Corrosion Inhibitors & How They Work

Last month, we published a blog titled Accelerated System Corrosion Testing with Calcium Silicate and Perlite Insulations.  The blog reviewed the developing NACE TG 516 protocol and results from the accelerated corrosion testing that Johns Manville completed on a pipe assembly insulated with our Thermo-1200™ and Sproule WR-1200® rigid insulation products.

Johns Manville has used the NACE TG 516 protocol to evaluate the impact of jacketed insulation products on carbon steel pipes under “real world” conditions designed to accelerate corrosion. These tests were conducted and evaluated by a third-party testing agency. In summary, the results from the most recent third-party testing performed on Thermo-1200™ calcium silicate, Sproule WR-1200 perlite insulations, and a silica aerogel blanket found that each material had similar “average” wall loss performance (i.e. average corrosion rates) in two test conditions (sweating and thermal cycling).

While the average wall loss was similar between all three insulations, the sample silica aerogel blanket demonstrated a significantly deeper maximum pitting depth, with the highest maximum pitting depth occurring under cyclic high/low temperature and wet/dry conditions.  Furthermore, the Thermo-1200™ and Sproule WR-1200® demonstrated the formation of thicker and more strongly adhered magnetite layers compared to the sample silica aerogel blanket when tested under the same cyclic conditions.

Given the formulations and inherent differences in the raw materials of each insulation tested, it’s important to understand the mechanisms driving the differences in performance.   Both Johns Manville products Thermo-1200™ and Sproule WR-1200® contain corrosion-inhibiting technology that buffer and protect the metal surface under aqueous conditions in the following manner:

During disassembly of the test assemblies, it was also possible to evaluate the pH at both the pipe and jacketing surfaces.  After the 6-month protocol, the pH for the Thermo-1200™ and Sproule WR-1200® maintained an alkaline environment (pH = 9-11) while the sample silica aerogel blanket maintained a pH between 6-7.  The ability of the Thermo-1200™ and Sproule WR-1200® to maintain a higher pH at the pipe surface throughout the testing protocol drives the understanding of the magnetite layer formation; this is described below.

There are generally two types of oxide layers that can form on pipe surfaces under the testing conditions in this protocol:

Figure 1a.  Hematite layer formation on one of the pipes after 6-month exposure to the NACE TG516 protocol at cyclic high/low temperature and wet/dry conditions. 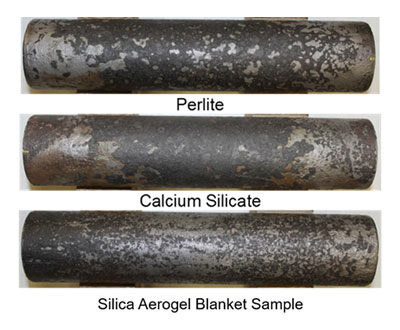 Figure 1b. Magnetite layer formation after 6-month exposure to the NACE TG516 protocol at cyclic high/low temperature and wet/dry conditions with Thermo-1200™, Sproule WR-1200®, and silica aerogel blanket sample.  Pipes have been cleaned to remove flaky hematite layer with a wire brush

Magnetite formation is driven by a reducing environment (oxygen deficient) with higher pH and higher temperatures.  The environment produced by the Thermo-1200™ and Sproule WR-1200® under the testing conditions promotes the formation of magnetite and not hematite compared to the sample silica aerogel blanket.  In general, one would prefer magnetite formation, which can help impede the propagation of further corrosion.  Hematite as seen with the sample silica aerogel blanket, can result in deeper and more harmful pits.

Though it was not possible in this testing protocol to evaluate the silica based physical coating while the system was in the aqueous phase, laboratory tests such as ASTM C1617 may simulate the effect of the silicates on the impact of corrosion on a carbon steel metal coupon.  Results from ASTM C1617 demonstrate lower mass loss corrosion rates (MLCR) for Thermo-1200™ and Sproule WR-1200® containing XOX corrosion inhibiting technology compared to silica aerogel blankets (Figure 2).

Finally, to confirm the longevity of the corrosion inhibiting properties of Thermo-1200™, ASTM C871 was used to measure the amount of silicate ions in the insulation after the product underwent repeated water soaks.  After 40 water soak and dry cycles, the silicate content did not change statistically.  These data points demonstrate the corrosion inhibiting-properties of Thermo-1200™ will not be diminished over time.

As the industry continues to grow in its understanding of the contributing factors to corrosion under insulation, Johns Manville will continue to be at the forefront of testing innovation.  The importance of quality data cannot be understated in continued product improvement.  If you have additional questions regarding this study, please contact your JM sales representative and/or JM technical services engineer.

We will be taking a detailed look at this topic on September 12th in our live webinar, "New CUI Test Results: Understanding the Corrosive Mechanism." Click here to register.