In the vast open space of the Canadian Province of Alberta, there are three major oil sands deposits covering 54,000 square miles, a land mass roughly the size of England. These surface deposits contain approximately 170 billion barrels of oil reserves in a mixture of sand, clay and viscous petroleum, otherwise known as bitumen.

These bitumen deposits must be processed and “cleansed” to yield the fluid, synthetic crude that is suitable for refining into salable products. 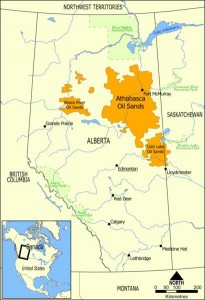 Pipeline or no pipeline, Alberta’s oil sands are in production.

Transporting this “heavy” petroleum south for refining by way of the proposed North-South Keystone XL pipeline has become a political issue for the Obama administration with environmentalists and oil producers engaged in a “jobs vs. climate change” argument over the merits of building it.

However, even if Keystone XL is never approved, and Alberta’s tar-laden resource is shipped to the Pacific for Asian buyers, today’s energy conservation story lies in the insulation now being used to reduce emissions and govern the oil sands production already underway.

Several high-temperature insulation alternatives are available, but most only function as specified up to a maximum of 450°F.  Temperatures beyond that can degrade the binders in fibrous insulation, leading to structural loss and non-uniform thickness.  This, in turn, results in added fuel consumption and increased emissions. Over time, it also means the degraded insulation must be replaced.

To contain the heat, improve efficiency and ensure personnel safety, the production engineers on the Alberta extraction project have frequently specified insulation manufactured from calcium silicate. This silica-based product maintains its structural integrity in this unusual high-temperature environment and, after several years of service, has proved resistant to abuse. By reducing heat loss and thus saving energy, the calcium silicate insulation – in this case, IIG’s Thermo-12® Gold — has helped curtail emissions that could conceivably harm the environment.

There are a lot of obstacles ahead to achieve the full production potential of the Alberta oil sands. These include:

For now, more than 1.6 million barrels of Alberta oil is being produced each day. And so long as production continues – with or without  Keystone XL – the extraction process will continue to be a lot safer, a lot less wasteful, and certainly more efficient than it would be without the right insulation solution. It’s the quiet environmental story that so far hasn’t earned a headline.